Glyphosate Discovered in Most Hummus and Chickpeas in New EWG Study 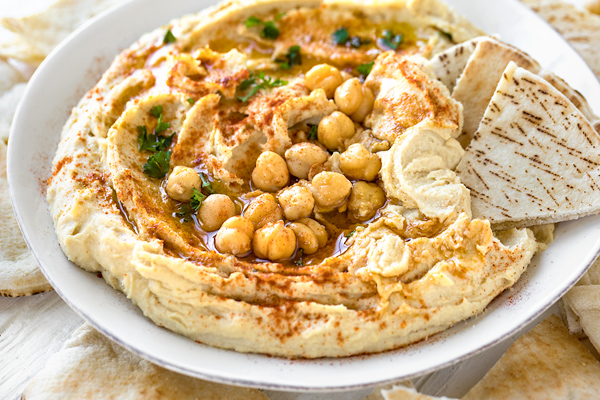 The health-food staple hummus and the chickpeas it is made from can be contaminated with high levels of glyphosate, a weedkilling chemical linked to cancer, according to independent laboratory tests commissioned by the U.S. NGO Environmental Working Group (EWG). The tests also found glyphosate in other kinds of dry and canned beans, dry lentils and garbanzo flour.

Of the 37 conventional, or non-organic, chickpea and chickpea-based samples tested, nearly 90 percent had detectable levels of glyphosate. One-third of the 27 conventional hummus samples exceeded EWG’s health-based benchmark for daily consumption, based on a 60-gram serving of hummus (about four tablespoons). One of two tests from a sample of conventional dry chickpeas exceeded even the Environmental Protection Agency’s too-permissive legal standard.

In 2016 The Detox Project and Food Democracy Now! released a report on the first ever testing for glyphosate in popular American foods: Glyphosate: Unsafe On Any Plate

EWG also tested 12 samples of organic hummus and six samples of organic chickpeas. Most contained glyphosate, but at much lower levels than their conventional counterparts: One dry chickpea sample had the highest average level of all our samples. Glyphosate use is not permitted on organic crops, so these samples may have been contaminated by the chemical drifting from nearby conventional crop fields, where it was likely sprayed as a pre-harvest drying agent or by a practice known as swapping out, which means swapping organic for conventional produce in the supply chain.

Hummus and chickpeas, as well as other beans, offer multiple nutritional benefits, and Americans should not stop eating them. Our findings show the need not only for a ban on all pre-harvest uses of glyphosate but also for a much stricter EPA standard, and increased testing by the Food and Drug Administration to determine how widely glyphosate contaminates our food.

Glyphosate is the herbicide sold for decades by Monsanto, now Bayer, under the brand name Roundup. It is classified by the International Agency for Research on Cancer, or IARC, as a probable human carcinogen, and by the State of California as a chemical known to cause cancer.

Roundup is the most widely used herbicide in the U.S., sprayed on different crops and during different parts of the growing season. For consumers, most worrisome is the spraying of glyphosate, shortly before harvest, on many beans and grains as a drying agent. Previous tests by EWG and other public interest groups have found glyphosate in popular breakfast cereals and other foods American adults and children love to eat.

All samples were purchased by EWG researchers online or at major food retailers in the Washington, D.C., New York City and San Francisco metropolitan areas, including Aldi, Costco, Giant, Harris Teeter, Safeway, ShopRite, Target, Trader Joes, Walmart and Whole Foods grocery stores. Tests were conducted by Anresco Laboratories of San Francisco, which is accredited by the State of California.

EWG also commissioned tests of 12 conventional and three organic samples of canned or dried varieties of lentils and black, navy and Great Northern beans. We found glyphosate in 60 percent of those samples. In 2019, tests commissioned by Friends of the Earth detected glyphosate in 100 percent of 27 samples of dried pinto beans, with an average concentration of 509 ppb.

In the U.S., chickpeas are grown mostly in Idaho, Montana, North Dakota and Washington. According to EWG analysis of data from the National Agricultural Statistics Service, the number of U.S. acres dedicated to chickpeas more than quadrupled from 2015 to 2018, growing from 200,000 to more than 800,000 acres.

The increase was fueled by soaring consumer demand for hummus, chickpeas and other chickpea-based foods. As Consumer Reports wrote in 2018, hummus sales have grown exponentially, reflecting a trend in “fresh snacking.” In 2019, hummus sales were about $780 million, according to information compiled by Statista, a market research company.

In 1997, the EPA increased the allowable tolerance for glyphosate in chickpeas from 200 ppb to 5,000 ppb. Although the EPA at first called the increased tolerance an emergency exemption, it was extended in 1998 and has remained in effect. The EPA’s glyphosate tolerance is based on toxicity studies in laboratory animals. It is based on outdated research, does not reflect recent studies, does not consider the carcinogenic activity of glyphosate – despite increased evidence – and does not include an additional tenfold children’s health safety factor.

Glyphosate is used on chickpeas, beans, lentils and peas for weed control and as a pre-harvest drying agent, or desiccant, to facilitate harvesting. Pre-harvest spraying can lead to high levels of glyphosate in the foods sold to consumers. A recent study in Germany found that individuals who consumed pulses, including lentils and peas, had higher levels of glyphosate in their urine than those who did not eat those foods.

By law, organic farmers are not allowed to apply glyphosate or other pesticides to grow and harvest crops. A recent study from Montana State University reported that organic chickpea farmers can combat weeds with practices such as shallow tillage and increased seeding rate.

As the USA Dry Pea & Lentil Council reported, crops can be dried naturally in the field before harvest. Although more research is needed, a recent Autralian study reported that farming can be profitable without glyphosate with the use of non-herbicidal weed management combined with targeted herbicide treatment at the beginning of the growing season.

In 2012 Monsanto asked the European Food Safety Authority, or EFSA, to increase the tolerance for glyphosate on lentils to accommodate the practice of desiccation in the U.S. and Canada. The EU’s current maximum residue level for glyphosate in dry chickpeas is 10,000 ppb, twice the EPA’s legal limit.

Despite the conclusion of the IARC that glyphosate is a probable carcinogen, the EFSA has yet to classify it as carcinogenic. In 2016, a group of 94 international scientists published a study criticizing the EFSA decision and calling on the agency to adapt the IARC cancer classification for glyphosate.

When it comes to testing food for glyphosate, the most commonly used pesticide in the U.S., the federal government seems to look the other way.

In 2018, the USDA collected more than 500 chickpea samples for pesticide tests as part of its Pesticide Data Program. However, the program does not include glyphosate testing. Although the FDA has tested some foods for glyphosate, the tests did not include foods known to be sprayed with the chemical. In 2019, EWG petitioned the Centers for Disease Control and Prevention to add glyphosate to its national biomonitoring program, a step needed to determine how widespread glyphosate exposure is in Americans.

Like other plant-based sources of protein, hummus and chickpeas, as well as other beans, offer considerable nutritional benefits. They are an excellent source of dietary fiber, high levels of vitamins A, E, and C, folate, magnesium, iron and potassium, as well as aids to weight control and reduced cholesterol. Commonly consumed by adults, hummus in snack packs has also become a popular addition to kids’ lunches. Chickpeas are also used as ingredients in baby food, both store-bought and homemade.